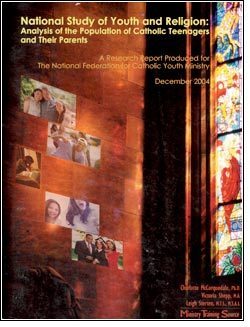 The National Study of Youth and Religion (NSYR) is pleased to announce the publication of a new report on Catholic youth based on NSYR data. The report, entitled "National Study of Youth and Religion: Analysis of the Population of Catholic Teenagers and their Parents," was published in December of 2004 by the National Federation for Catholic Youth Ministry with the help of Ministry Training Source. Charlotte McCorquodale, Ph.D, Victoria Shepp, M.A., and Leigh Sterten, M.T.S., M.S.A.S. authored the report, which analyzes data on Catholic youth collected by the NSYR. Among other issues, the report examines religious practices and beliefs, participation in youth ministry and religious education, Mass attendance, and information on young Catholics' families and lifestyles. Copies of the report can be purchased directly from the National Federation for Catholic Youth Ministry's on-line store for $4.00.

The report on Catholic youth supplements findings from other, major works coming out of the NSYR. "The Catholic report is a companion to Soul Searching, by Dr. Christian Smith with Melinda Lundquist Denton," says Dr. Robert J. McCarty, Executive Director of the National Federation for Catholic Youth Ministry. "Soul Searching describes the overall context of American teenagers in terms of religion and spirituality, while the Catholic Report produced by the National Federation for Catholic Youth Ministry with Ministry Training Source provides an analysis of the specific Catholic data." Dr. McCarty goes on to say that "the report identifies serious challenges to the Catholic Church's pastoral ministry to, with and for young people, as well as specific conclusions and pastoral recommendations." In addition to more than 80 tables and figures analyzing the religious activities and beliefs of Catholic teenagers, the report concludes with suggestions for parents and religious leaders to improve pastoral care to Catholic youth. The authors note that religion plays an important role in the lives of teenagers who regularly attend Mass or participate in other Catholic activities; and most Catholic teens, regardless of their involvement in Catholic education, desire to know more about their religious faith. The report also demonstrates other benefits of participation in Mass, such as a reduction in "at-risk behaviors" and an increase in the number of caring adults who teens can turn to in times of trouble. While the Catholic report uses NSYR data to examine the religious lives of Catholic youth, the report is published by the National Federation for Catholic Youth Ministry, which is solely responsible for the content of the report. All inquiries about the report should be addressed to the National Federation for Catholic Youth Ministry. This report on Catholic youth will be followed by a report on Protestant youth, "Portraits of Protestant Teens: A Report on Teenagers in Major U.S. Denominations," to be published by the NSYR later this Spring. The National Study of Youth and Religion is funded by Lilly Endowment Inc. More than 3,350 teens along with one of their parents participated in the random-digit-dial telephone study of U.S. parent-teen pairs. The purpose of the project is to research the shape and influence of religion and spirituality in the lives of U.S. adolescents; to identify effective practices in the religious, moral and social formation of the lives of youth; to describe the extent to which youth participate in and benefit from the programs and opportunities that religious communities are offering to their youth; and to foster an informed national discussion about the influence of religion in youth's lives to encourage sustained reflection about and rethinking of our cultural and institutional practices with regard to youth and religion.