by Christian Smith
with Patricia Snell 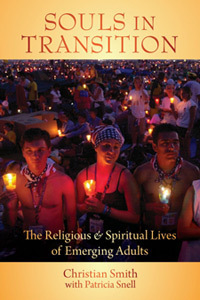 What happens to the religious beliefs of America's teen when they graduate high school? How do college and the real world affect those beliefs? Based on candid interviews with thousands of young people over a five year period, SOULS IN TRANSITION reveals how the religious views of 18 to 24 year olds have been strengthened, challenged, and changed.

SOULS IN TRANSITION vividly describes the broader cultural world of today's emerging adults, how that culture shapes their religious outlooks and experiences. Combining both a national overview and an "insider's" view of teenage religious and non-religious perspectives and commitments, Smith and Snell provide new and important insights and understanding that will be of great interest to religion and adolescence scholars and students, parents of youth, religious leaders, youth workers, and teenagers themselves.

SOULS IN TRANSITION is available from Amazon.com for just $21.97.

Praise for SOULS IN TRANSITION:

"It would be hard to exceed the brilliance of Soul Searching, but Smith and Snell have achieved this feat in Souls in Transition. Through a masterful combination of surveys and interviews the authors illuminate emerging adults' religious beliefs as no one has done before, and also provide numerous insights on how religion is connected to other aspects of their lives. This book is social science at its best and should not be missed by anyone who wishes to understand the lives of today's emerging adults."
--Jeffrey Jensen Arnett, Clark University, Author of Emerging Adulthood: The Winding Road from the Late Teens Through the Twenties

"Christian Smith's work in the National Study of Youth and Religion is the gold standard for research on religion and adolescents--and now, emerging adults. So buckle up: Souls in Transition reads like an avalanche as Smith reports the findings of the 18-23 year old cohort, takes on our culture's current "crisis of knowledge and value," reveals the uneven terrain of emerging adulthood, highlights the massive importance of parents and congregations for this age group, and notes the paradoxical triumph of liberal Protestant values in the emerging adult worldview. Insisting that religious disinterest in 18-23 year olds is neither inevitable nor universal, Smith challenges parents and congregations to support and model religious engagement with emerging adults. If you're a parent, pastor, campus minister, educator, congregation member--or a "twenty something" yourself-- this book needs to be on your shelf."
--Kenda Creasy Dean, Ph.D., parent, pastor, and Associate Professor of Youth, Church and Culture, Princeton Theological Seminary.

"Unlike the nonsense delivered in news magazines and opinion polls, Souls in Transition is serious scholarly research about religion among emerging adults. The sober, fair-minded presentation of evidence about what is and what is not happening among Americans age 18 to 23 is refreshing."
--Robert Wuthnow, Princeton University

CHRISTIAN SMITH is the William R. Kenan, Jr. Professor of Sociology and Director of the Center for the Study of Religion and Society at the University of Notre Dame. He is the author of many books, including Passing the Plate: Why American Christians Do Not Give Away More Money; Soul Searching: the Religious and Spiritual Lives of American Teenagers, Winner of the 2005 "Distinguished Book Award" from Christianity Today; and Moral, Believing Animals: Human Personhood and Culture.

PATRICIA SNELL is Associate Director of the Center for the Study of Religion and Society at the University of Notre Dame.

Something to Think About “The National Study of Youth and Religion affirms how much parents and adult mentors matter to adolescents’ spiritual development.” The focus of this blog site on Christian Smith’s “Souls in Transition.” Breaking the study into easily digested concepts, the focus here is on the conclusion that not only community and peer to peer relationships matter; parent’s involvement counts just as much if not more.